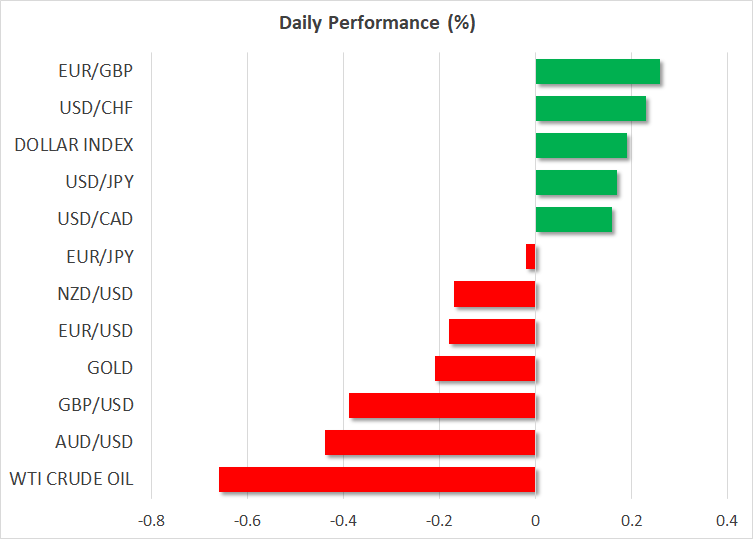 The inflation trade took a beating after the Fed's seismic signals about faster rate increases, but the blues didn't last long. Wall Street staged a massive comeback on Monday as market participants concluded that cheap money is helpful, but not necessary for equity markets to flourish.

In fact, abandoning the regime of infinite liquidity might ultimately benefit equities, as higher rates imply investors no longer have to worry about runaway inflation eating into corporate profits. It boils down to what the market likes more – cheap money or inflation staying in check – and apparently the answer is that both can work for stocks.

One element that calmed some nerves yesterday was a speech by New York Fed President John Williams, where he signalled that the economy hasn't improved enough yet to pare back any stimulus. He is a permanent FOMC voter and a member of the Fed 'inner core', so the leadership clearly wants to take things slow.

The spotlight will fall on Chairman Powell today, who will testify before Congress. He is unlikely to say anything brand new but investors will still tune in for the Q&A session with lawmakers, where he might be grilled about the future of the asset purchase program.

The serenity in equity markets translated into some distress for the US dollar, which snapped its recent winning streak to move lower without any single catalyst to blame. The recent rally might have simply been overextended.

As always, a sinking dollar lifts all other FX boats and that's precisely what played out, with sterling capitalizing the most on the greenback's retreat thanks to its strong correlation with stock markets.

The dollar's immediate path will depend on whether Powell lets anything slip today, while in the bigger picture everything hangs on economic data, particularly on the jobs numbers that will shape the timeline of the Fed's exit strategy. Overall, there is scope for the dollar's newfound rally to persist into the summer, as the market continues to price in a taper announcement by September.

Over in the commodity space, crude oil reached new multi-year highs, drawing power from the recovery in equities, the slightly softer dollar, and the setback in the US-Iran nuclear talks.

Iran's new president-elect is himself under sanctions from the US and has already ruled out a meeting with President Biden, further dampening the mood in the stalled negotiations. The sixth round of talks concluded with diplomats hailing 'progress' but having nothing concrete to show for it.

The signal was that any return of Iranian production will be delayed, giving traders the green light to increase their exposure to energy markets, which have been on a tear lately as demand has outstripped supply. This was music to the ears of the Canadian dollar.

Finally, gold prices staged a decent rebound, defying the spike higher in Treasury yields and instead focusing on the pullback in the dollar. That said, it remains to be seen whether this is a dead cat bounce as the precious metal still has to grapple with a combination of less liquidity, fading inflation fears, and a potentially stronger dollar.

US Open Note – Stock indices to claim monthly gains despite jitters; dollar on the backfoot